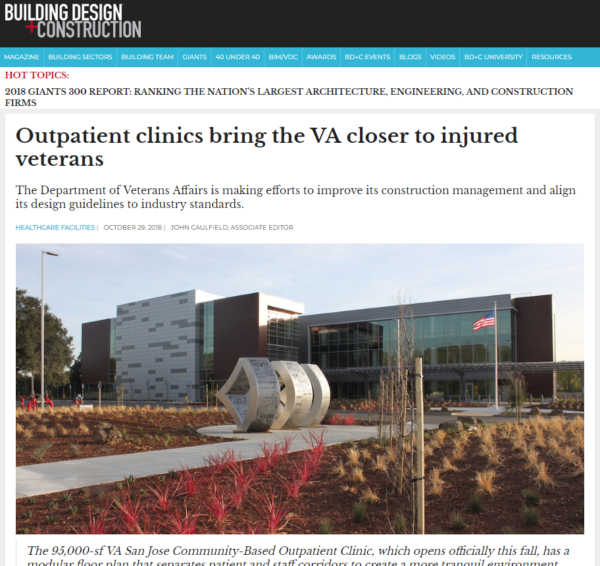 In October, Building Design + Construction magazine ran a feature entitled Outpatient Clinics Bring the VA Closer to Injured Veterans. BD+C spoke to Apogee’s president Mike Beezley on construction administration at the Department of Veterans Affairs, as well as anticipates areas of growth for the department in the coming years.

“Last year, Apogee finished its design for a 15,000-sf behavioral health center in Columbia, S.C., and so far this year it has completed the design for an administrative space in Orlando, Fla., the expansion of a mental-health facility for the Fresno, Calif., VA, and a new emergency department for the Houston VA.

Beezley says that, over the last year, Apogee has seen a “substantial increase” in the renovations of operating rooms and hybrid ORs, sterile processing services, pharmacies, and elevator projects. “We’re also seeing an uptick in campus master plans with serious thought to what their needs will be, over the next 10 to 20 years” he says. Beezley adds that the VA is giving veterans in rural areas better access to healthcare through its expansion of CBOCs.” – John Caulfield, Associate Editor of Building Design + Construction

Click here to read the full article and Mr. Beezley’s comments on the future of the VA.